As a church, we support both UK organisations and wider overseas mission partners. We also support individual missionaries with whom we have links, who are working in various parts of the world.

St Paul’s has a long history of supporting Mission Partners. We continue to support and pray for the work of John & Sian Newton-Webb out in Japan with OMF. We also support the work of Langham Partnership which helps to train Bible preachers all around the world.

Our Mission Partner John Newton-Webb lives with his family in the city of Sapporo in Japan, where he leads a small church plant. 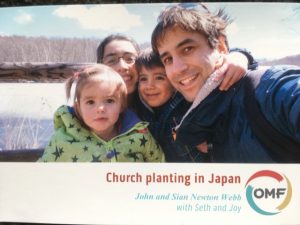 We lead a church plant (started in 2009) in the city of Sapporo in the north of Japan. Sapporo is the world’s second snowiest city, so we are guaranteed a white Christmas! But more importantly, the Lord guarantees that he will keep his promises and work through his word to bring glory to his name and peace to men and women. It has been a strange year for us as a church: we have been growing and shrinking at the same time!

The area we are particularly focused on reaching with the good news of Jesus Christ is around 30000 people, and there is no other church in this area. However, we are probably the closest church for at least twice that number of people. Only the Lord can make our mustard seed of a church grow and blossom here.

While the general trend across Japan is for the church to be getting smaller, we have seen the Lord’s special blessing this year, with five people coming to Christ and being baptised, and another person coming into membership. However, at the same time, we have had a significant number of people move away for either work or health reasons. We rejoice in the baptisms, but the departures mean that our already small flock here is seeing on average five less people gathering on a Sunday, which brings a variety of challenges and limitations to the ministry here. The majority of our 11 church members are very new Christians, and we would appreciate your prayers for them as we seek to disciple them, and as they face various trials.

Though we have to keep in place a long list of measures to prevent the spread of coronavirus, we are still able to meet and run events here. Our regular programme includes Men’s and Women’s Bible studies, various other Bible studies, Mums and Tots, a hymn-singing group, a ukulele circle, tract distribution at the train station and, of course, our Sunday service. In Japan, most religious buildings are places you only go to perform particular religious rituals. That, along with fears about proactive religious groups (there are a lot of cults here), and a lack of knowledge of what goes on inside a church building, mean that the barrier to entering a church here is very high. As one way to lower that barrier we recently held a 100 Yen (about 72p) Bazaar. Alongside the items for sale, children could also make launchable cardboard rockets. Some people came to the church for the first time, others for the first time in years, along with some regular visitors. We managed to have good chats with some, and everyone went away with information about the church and a tract. The following day we held a special Harvest Festival Outreach Sunday Service, and were once again grateful for a number of guests.

We support John & Sian through an organisation called OMF.

Click here to read more about them and their work. Home – OMF | UK

Why do we support Langham Partnership?

Langham Partnership was founded in 1969 by Revd. John Stott, then the Rector (or senior pastor) at All Souls Church, Langham Place in London, hence the name. John Stott was a Bible teacher in great demand world-wide. He frequently visited churches in the Majority World, – a more positive term than Third World or Developing World, encompassing Africa, Asia, South and Central America and the Caribbean. As he travelled, he understood the acute need for further biblical training for gifted local leaders.

Initially, a Trust was set up to sponsor young Christian leaders from the Majority World to study for doctorates at British universities, and to support them as they returned to teach at bible colleges in their own countries. Those who received scholarship funding from the Trust became known as Langham Scholars, a worldwide family that has now grown to well over 300.

Langham Partnership then expanded into producing Christian books that would be a resource for Majority World Scholars and pastors. In the UK we have a wealth of Christian literature, but these are in English and are written from a western perspective – that is, the outworking of bible truths reflects the issues faced in western countries, not necessarily those faced by people in the Majority World. Today Langham Literature helps develop ground-breaking commentaries written in local languages and relevant to local contexts. It also distributes biblical resources to churches, pastors, and bible colleges, and supports writers and publishers who translate and write books for the local context. From July 2019 – June 2020 Langham Literature supplied 49,122 bible-centred books to pastors and colleges in the Majority World. 18,740 of these books were supplied free of charge.

In 2002 a third initiative was begun. Langham Preaching partners with Majority World church leaders to nurture indigenous biblical preaching movements for pastors and lay preachers. With the support of a team of trainers from many countries, they provide seminars focusing on practical, biblically based training. In the 12 months up to June 2020, 610 local trainers led Langham Preaching training seminars in 69 countries, equipping 9661 pastors and lay leaders to teach God’s Word.

So, I hope you can see why this strategic ministry is supported by St Paul’s Church here in Little Eaton. Our small local church really can influence things world-wide.

2021 will mark the 100th anniversary since John Stott’s birth. Langham and others will be running several events to celebrate this, and to thank God for his life. Billy Graham called him “the most respected clergyman in the world today”. In 2005 he was listed in Time Magazine’s “100 Most Influential People” and was named in the Queen’s New Year’s Honours list as Commander of the Order of the British Empire (CBE).

You can read more about the work of Langham partnership here: Home | Langham Partnership UK & Ireland